In the same year that Prince Charles married Lady Diana Spencer and the first London Marathon was run, a man with a passion for British manufacturing and engineering created his first entry level semi-automatic case sealer from a rented room within a former corset factory.

Now in its 40th anniversary year the company, which is today under the leadership of the third generation of Yates’, is reflecting on its history and looking to the future.

The early days
Back in the early 1980’s UK manufacturers, outside of the automotive industry, were starting to wake up to the benefits of automation. Within the food sector, the advent of the ready-meal led to manufacturing at unprecedented rates. Customers, becoming increasingly time poor were demanding more and more variety, and the pressure from retailers was on manufacturers to deliver.

Consequently, many became reliant on a range of processing and packaging technologies to manage production.

Ron’s semi-automatic case sealer, which is still widely sold by Endoline today, enabled manufacturers to seal cases at speed, and with precision. As demand for automation increased, Ron and his team (many of whom are still employed by the company today) engineered new systems which would support manufacturers.

In 1990, having moved the business to larger premises in Biggleswade, Bedfordshire, where the company is still based today, Ron was joined by his son, Alan.

During the 90’s the business went from strength to strength. Its range of end-of-line packaging machines grew to include both semi and fully automatic case erectors, case loaders, case sealers, and hand-packing stations. At a time when the health conscious and governing bodies were dictating that a greater degree of nutritional information had to be printed on food packs, Endoline, having forged alliances with other OEM’s, integrated its systems into manufacturing plants to create fully turnkey lines.

Customisation and international growth
With engineering still firmly at its roots, Endoline continually re-designed its systems to incorporate unique technical features which would aid both manufacturers and overcome any packaging automation issues.

For instance, the company’s unique dual opposing vacuum technology was first launched in 1990 to ensure that each case was opened positively from both sides, to eliminate damage to packs, which was particularly important in the forming of shelf-ready cases. The booming snacks industry, and demand on manufacturers to produce greater product varieties and sizes led to Endoline creating the 744 Fully Automatic Random Case Sealer in 2012. This system went on to set new standards in high speed, random case sealing and was sold to snacks manufacturers across the globe. It also continues to be a flagship, award-winning Endoline machine.

Endoline has always been, and will continue to be, a staunch British manufacturer. During the recession in 2008, while reaffirming its vision that manufacturing and development should remain focused on one key site of manufacturing excellence in the UK, the company devised a clear export strategy to sell its systems overseas to boost sales during the crisis. The move paid dividends as Endoline’s reputation for engineering high quality systems with technical design components to meet specific customer needs laid the foundation for the company’s overseas success.

Today, Endoline, through direct customer sales and distributor relationship, has a presence in over 20 countries.

Looking to the future
Today, the vision which Ron Yates set out back in 1981 still holds strong: “We pride ourselves on our engineering expertise, product quality, after sales service and pursuit of the corporate objective – a total dedication to customer needs”

Now under the steer of the third generation of Yates, with Andrew Yates as Managing Director and Richard Yates as Operations Director, Endoline is in a good position. The pandemic expedited demand from manufacturers to automate and Endoline today boasts a strong order pipeline.

In 2019, Endoline entered into a strategic partnership with FANUC UK and, for the first time in its history, launched a sister company, Endoline Robotics Limited (ERL). The move was made to meet the ever-growing demand for fully automated end-of-line systems, which increasingly require robotic solutions.

“My grandfather, Ron, was an exceptionally gifted engineer, qualified as both a Chartered Mechanical Engineer and Chartered Electrical Engineer – he was to all intents and purposes the Lionel Messi of engineering,” Andrew comments.

“To this day, this passion for engineering and UK manufacturing is at the heart of Endoline and will drive us into the future. As a family, we firmly believe that a business is only as good as the people employed and the product created. We are very fortunate because we are excellent in both of these areas.

Even after all these years our products remain industry leading and, in terms of our people, we have some fantastic, dedicated, loyal and hardworking employees, many of whom have spent their entire careers with us. Both Richard and I are delighted to now be at the helm of the company and, one day in the future, we look forward to handing on the mantle to the fourth generation of Yates.” 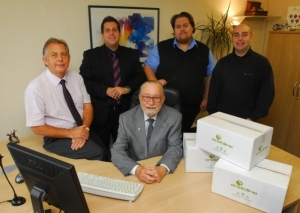 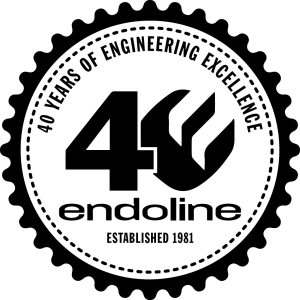 Endoline is celebrating 40 years in business 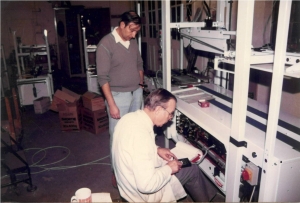 Ron Yates working on one of the very first Endoline machines. 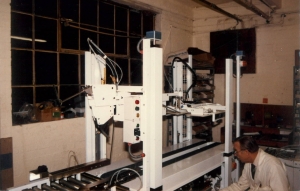