Endoline will install the four case erecting systems and integrate them to work with two new, Moba MR-12 robot loading cells. Filled cases will be fed through to the 734 which can seal up to 22 random sized cases per minute. Endoline modified the high-speed sealing system with servo drives to manage the increased level of output.

As the narrowest case erector on the market, at only 1M wide, the 251 seamlessly integrates into Moba’s egg packing systems.

Built to a small footprint, the 251 Case Erector can be installed within the most compact factory settings. Endoline have created a layout to work within the restricted space of the Bird Bros factory, while enabling them to erect and load four different case formats simultaneously at speeds of nine cases per minute, per format.

Endoline have also designed the conveyor layout to suit the factory space, installing chain transfer conveyors to make quick 90 degree turns, which will reduce the overall length of the system.

By automating its packing line, and increasing capacity for output, Endoline will enable Bird Bros to take on new business as required, while reducing reliance on manual operators.

Endoline Automation’s installation within Bird Bros will take place at the end of October. 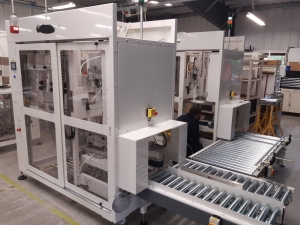 Packaging automation set to aid food manufacture growth in the wake of Covi...